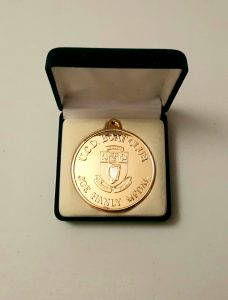 The Hanly Medal is awarded occasionally by OCBC to individuals who have made an outstanding contribution to or achievement for UCD Boat Club.

The Medal is named in honour of Joe Hanly, who was one of the most distinguished members of both UCD and OC Boat Clubs and who was also a President of UCDBC.

Joe joined UCDBC in 1944 and in his Maiden (Novice) season he rowed himself on to the Senior VIII – quite an achievement in any era. Joe continued to row on the First crews until 1949 and was on the UCDBC Senior VIII Pot-winning crews of 1947 and 1948. He was also one of the 6 UCD men in the Ireland crew of ‘The Thin Green Line’ fame at the 1948 London Olympics, Ireland’s first international crew.

Joe studied Veterinary Medicine and following graduation worked on the academic staff of the UCD Veterinary College until his retirement. His commitment to UCD rowing was legendary. On one famous occasion in the late 1940’s, oral exams that Joe had to sit were going to clash with Henley. He approached his Professor to discuss the predicament, and, after some talk, the Prof. said it came down to Hanly or Henley. ” It’s Henley”, said Joe, and it was. Fortunately the scheduling problem was satisfactorily solved, as so many were in those days, at the Autumn sitting.

The Medals were first commissioned and presented in Joe’s memory by Jane Hanly, Joe’s widow, in 1997.

They are awarded to individuals who have, in the collective opinion of OCBC,  made an outstanding and exceptional contribution to UCD Boat Club through their achievements on the water, their endeavours off it or both. To date 7 Hanly Medals have been awarded, the recipients being: