Old Collegians Boat Club was well represented at the 2013 FISA World Masters Regatta which took place in Varese, Italy in September. The event attracted 3,355 athletes from 40 countries, the biggest ever entry. The club took part in C (over-43), D (over-50), E (over-55) and F (over-60) events.
Having our own boats at the event was a great advantage and credit is due to the towing party, Tom Fennessy, Paul Romeril, James Heney and Greg Hamil, who towed the boats from Dublin to Varese. The weather conditions on the homeward journey were particularly challenging. It was as a result of Tom Fennessy’s great skill and experience that the trailer and all the boats arrived back in Dublin unscathed. 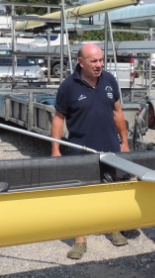 Given that the event was so close to one of the world’s fashion capitals, Milan, it was appropriate that the OC crews turned out in style in their new Merc Partners sponsored one-piece suits. 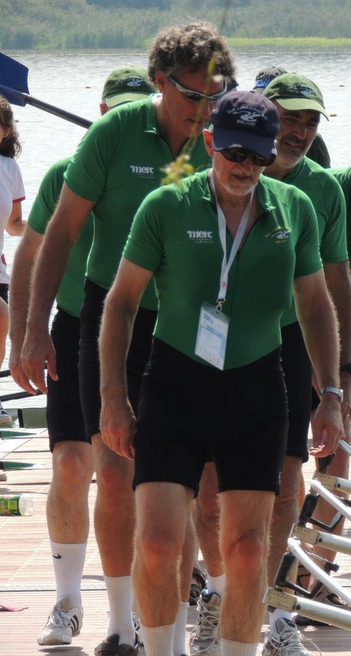 Ned Sullivan, Steve Wilmer and Paul Romeril on the catwalk in Varese. 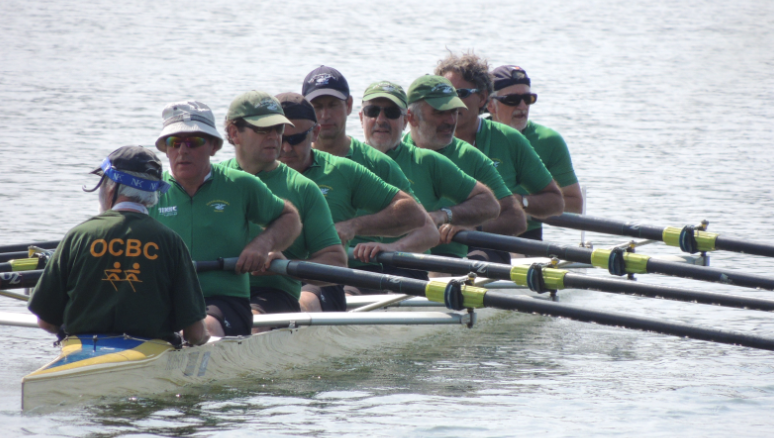 Phelim Murray sets the rhythm for OC E8+ on the way to the start.

The particularly large contingent from Ireland didn’t go unnoticed and it was the Irish impressions of the event that were quoted on the FISA web site which summed up the event: http://www.worldrowing.com/news/masters-regatta-closes-2013-world-rowing-season:

“Amongst the competitors was a large contingent of Irish rowers who were making their annual trip to the Masters Regatta, the highlight of their season. “The standard of racing here is really high,” said Commercial Rowing Club, Dublin’s Liam Gleeson. “People often think that it’s easy to win here but it is competitive. It is not just about turning up,” he explained.   Coming to Varese was a welcome reprieve from the rowing conditions they face in Ireland. “The weather is fantastic, there is no wind and the water is flat,” Eoin Wilson of Old Collegians Boat Club described, with crew mate Enda Bracken adding jokingly, “we’re baking in this heat!””

In spite of the heat our crews were competitive. Barry O’Connor’s insightful selections saw the OC rowers form composites with Commercial, Cappoquin and City of Derry Rowing Clubs and all of our boats were in the hunt at the finish.

Certainly composite crews and international crews are now the order of the day particularly in the eights events. It was down to an Ireland eight comprising oarsmen from Commercial Rowing Club, Belfast Boat Club, Drummoyne Boat Club, Cappoquin Boat Club and Dan Donnelly from Old Collegians to bring home a medal in the D8+ category.
The next event on the masters rowing calendar is from July 25th – 27th 2014 : 5th Euro Master Regatta Munich. Hopefully it will be a little cooler! 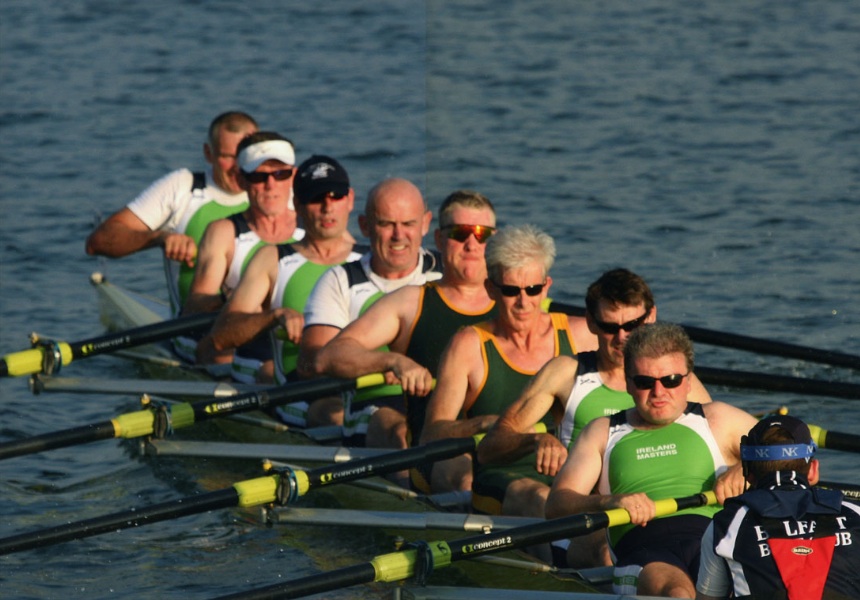 The Ireland crew winners of the D8+ in Varese.