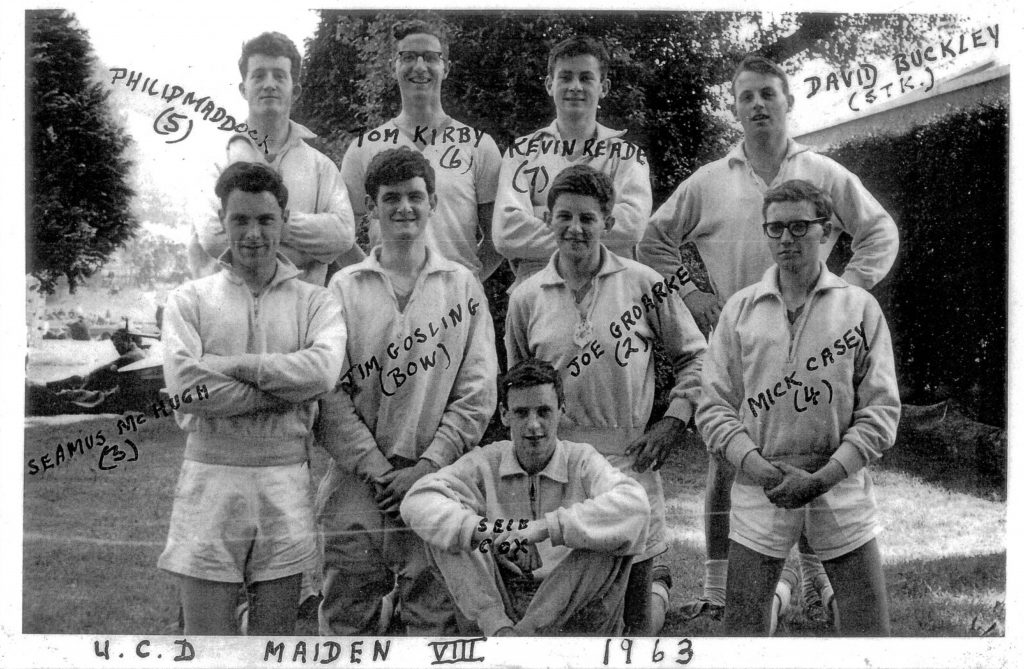 In 1962 College did not open until October.  A quick few sorties in the BOX and the tub pair had one ready for the wide wooden IV borrowed from Trinity.  It was a beautiful pre-war boat wooden clinker with brass fittings.  It was flat bottomed and the seats were offset from the centre .  It was before the era of the five day week and lectures were from 9am -1pm on a Saturday morning.  Practice at 2.30 on Saturday and Sunday afternoons did not furnish much time and prevented any dawdling.  Austin Carty was a great Captain and organiser.  Everybody got out in an VIII.  By December he had four VIIIs that he took to Belfast for a Queen’s at home.  On the way back the bus was in full voice singing “Kevin Barry” and the “Boys of Kilmichael” when we were stopped at the border by the “B” specials.  John had a terrific task in trying to silence us.   We were a lively lot with John Dowling being one of the liveliest.  The Boat Club Balls were a huge College Event in those days and the 1962 Boat Club Ball had more than 500 at it.

College was tiny in those days crammed into Earlsfort Terrace .  Just inside the entrance between the main door and the Porter’s lodge was the Boat Club Notice Board.  It had a radiator underneath and a great meeting place for maidens. The head porter , Paddy Keogh, got to know us very well and tolerated our horse play.   In Hilary term one had to check whether one was selected for  the “Flippers”, “Flappers” or “Floppers”.  On occasion one would see the late Seamus O’Scollain complete with his 7’ Boat Club Scarf strolling along the corridors as his class emerged from one of Jim Meenan’s.   lectures.  Seamus was an unsung hero in that he ensured that Ireland had large Petroleum reserves during a period the country would have been closed down without them.  Austin made sure that the Maidens got many away trips including the Galway head and the Erne Head (for which Saturday lectures had to be missed).  The Galway head was particularly traumatic as we had to be pulled out of a dance in Salthill before being attacked by a local crowd.  We did not get out as early as was necessary as a few stragglers had to be rounded up and the bus was surrounded and  terrorised for about 5 minutes.

Trinity Regatta that year was on the June Bank Holiday and our first regatta. The maidens came nowhere.  A little later we travelled to Cork for three regattas, Cappoquin, Cork and Fermoy and came away with five trophies.  The IV had replaced Phil Maddock who was as strong as an OX by the late Seamus McHugh from the Glenties. Seamus who had trained as a primary school teacher and not at the age of 27 was taking a degree to become a secondary school teacher transformed the crew from Novice to Senior he had such a steadying mature influence.  From then on it was virtually unbeatable.  It led by so much in Carlow that that we easied lengths before the finishing line and glided to victory to the music of a brass band.

Another member of the crew, Jim Gosling, influenced the shape of Dublin.  He lived in an attic flat in Merrion Square and wrote continuously to the Irish Times objecting to the proposal to build a Cathedral in Merrion Square.  It had been a running sore that the Church of Ireland had commandeered Dublin’s only two Cathedrals and the RC’s had only been left with a pro-Cathedral.  To build a Cathedral was as imperative as making up for losing the battle of Kinsale.  Jim’s task seem impossible but he persevered and won.

This year was a momentous year in the history of Ireland and the World. It was a period of intense political, social and economic change.  It saw the first Bond film, Dr. No, shown in No. 85 St. Stephen’s Green.  It was the era of Hatch Hall, Loreto Hall and Dominican Hall now all gone.  I have just seen the “Sold” sign on Loreto hall.   It was the era of the Ouzel Galley that one walked through to get the 25, 26, 66 or 67 on Ashton Quay to the Boat Club.  If one was short one had to get off the bus at Booth Poole (4d) as the Boat Club was 6d.  It was a great caring warm friendly club with Billy Bass repairing boats and blades with his shoe polish tin of glue sitting on his Bunsen burner, regaling us with the stories of great crews in particular the crew of 1932 that came second in the Chester Head.  In lectures one dreamt of the outings to come, the splash of water at the catch and the movement of the boat.  One could hear the cry of the seagulls hovering over the Corporation rubbish dumps not far from the banks. It takes a while for the happy memories to seep back. It would be nice to see many of that year again at the Centenary. 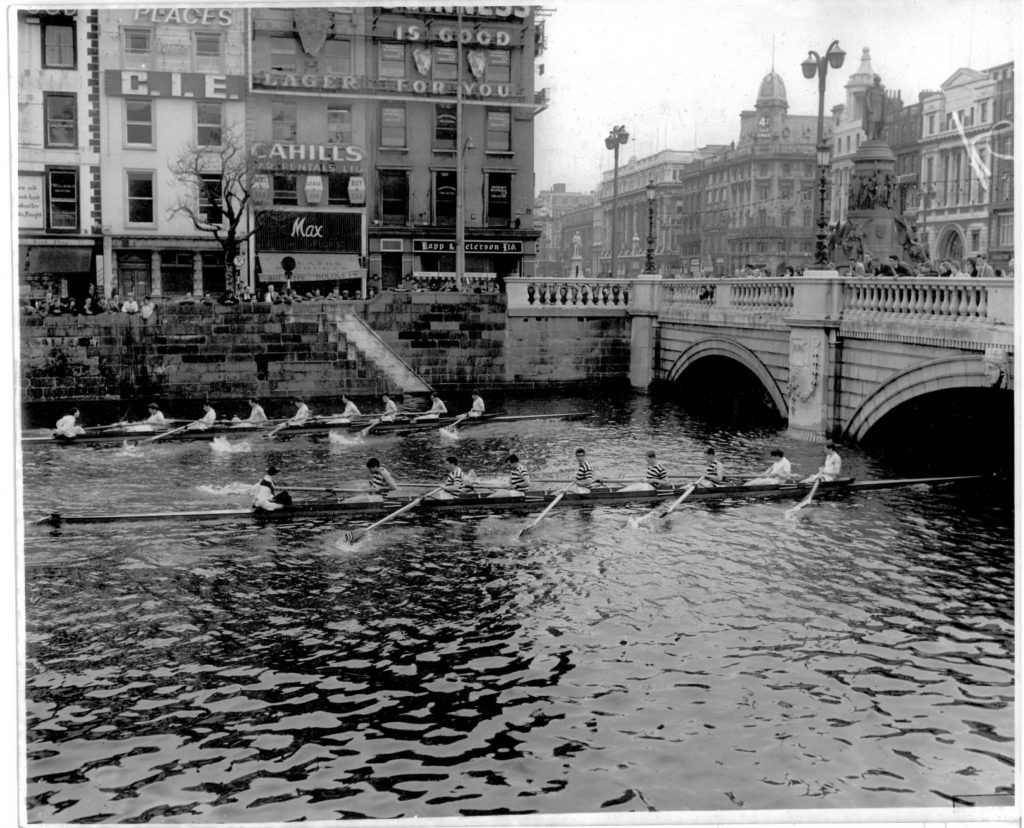 The photo above appeared in the Irish Independent on the Monday after the Dublin Head.  In 1963 there was no Junior VIII as the previous year’s Maidens had all left.  We started in fourth position just in front of Trinity’s Junior VIII and they finally caught us approaching O’Connell Bridge.  On the road O’Connell Bridge is as wide as it is long leaving very long narrow arches on the river. I had positioned myself in the centre of the river with a dead straight course through the  centre arch which  is not much wider than an eight and oars.  Trinity came on my outside and headed for the same arch.  Two into one does not go and I was forced to swing out to my left for the wall and hope I could straighten and get an approach for the arch.  It was my first time on the lower Liffey and I was terrified.  We got through without a scratch.  The second photo was taken on the front lawn of the old UCD Boat House.

Seamus McHugh joined UCDBC in 1962 during the brilliant Captaincy of Austin Carty.  Recruitment have been so successful that four UCD maiden VIIIs travelled to Belfast in December for a Queen’s at home in a bus driven by John Gallivan, who had a dreadful time trying to control us when the bus was stopped at 2.00 am on the way home by “B” Specials.  Later in the month Seamus McHugh and Tom Kirby won the Butler Cup with some distance to spare in a large and competitive competition.  Seamus was a primary school teacher and had become the principal of a Primary School at the age of 19.  He was then studying Arts at UCD to become a secondary teacher. He was the youngest of 10 children and had grown up in the townland of Muckross in the Glenties in West Donegal and never lost his unusually soft and musical Donegal accent.

Austin continued his great work by having 3 VIIIs in the second term.  In those days the Porter’s lodge was on the left of the entrance at Earlsfort Terrace and the UCDBC Notice Board just beside it in the most prominent position of all club notice boards.  We eagerly awaited to find out whether we were rowing with the Flippers, the Flappers or the Floppers.  As there were lectures on a Saturday morning rowing took place in the afternoon, and similarly on Sunday as everybody went to Mass in the morning, there being no evening masses at that time.    By Summer we were down to two Eights and out of them one of the best ever Maiden iVs that rowed for UCDBC emerged.  Seamus McHugh at Bow, Tom Kirby at 2, Kevin Reade at 3 and stroked by Dave Buckley.  Seamus was 27, Tom was 20, as I think was Kevin Reade and Dave Buckley was in his final year engineering.  None had ever rowed before and none were particularly “sporty”.  It would be 8 years before there would be s similarly mature Maiden Crew that would be later named the Animals.

The IV went Cork Cappoquin and Fermoy, driven by Seamus in VW Beetle and came back victorious with a clean sweep of 3 wins.  It went on to win another three races at Carlow, Athlone and Waterford.  At Carlow they were so far ahead in the final that they stopped rowing well before the finish and glided in with perfect balance to the sound of a stirring Brass Band amidst glorious sunshine and cheering spectators who had attended in great numbers.

May he have glided into Heaven to the heavenly sound of Angels as he did on that magical day in June, 1963.

Some fine photos of Old Collegians competing in 1963 and 1964. Click on any of the photos below to see a lager image. 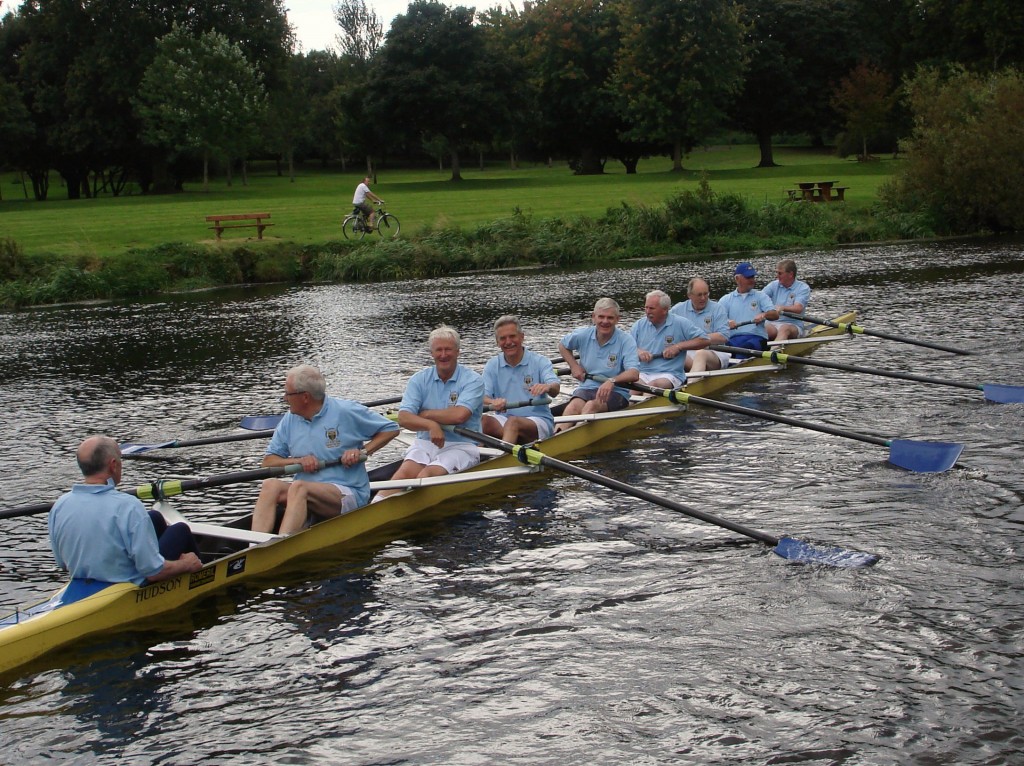 Yes, we had a great day at Islandbridge and in Ryans and Peploes later. We got the eight on the river, paddled up and down a couple of times without losing anybody! Spouses and partners were in attendance and enjoyed the experience.

The late Dr. Frank McKenna was laid to rest yesterday (21-02-11) after Mass in the Church of Our Lady Queen of Victories Sallynoggin which was packed to standing room. In his first year in UCD he got his colours for swimming and then moved on to rowing. He quickly made the Senior VIII and was selected to row in the World Championships in Vienna in 1938 but Hitlers acute sense of timing took priority. He was a very active supporter of UCDBC in the 60’s. I have very fond memories of sessions in the old UCDBC Boat House (newly build when Frank McKenna was rowing) in the 60s. After various dinners (mainly in the Clarence or West County) or celebrations the stalwarts of OC including Ronan Bannin, Jim Meenan, Joe Hanly, John McDermott and Frank McKenna would bring dozens of bottles of Guinness to the Boat House where the plaque erected in the memory of Dr. Arthur Cleary who funded the building of the boat house in 1929 was covered with the first available towel, before a bottle could be opened. The party was generally opened by Frank McKenna who had a very good voice singing Ach von de musica and getting everybody join the Chorus. The party would continue into the small hours with various contributions from Jim Meenan including Sweet Angelina and other ditties from the 30s before descending into more robust and racous singing. Pat O’Sullivans classical tin whistle would be called upon several times to restore musicality which Tom Kirby would follow and sometimes accompany with an off beat jazz version. It was an opportunity to mix with the then remote gods of the 1960 VIII and the remoter gods of, as it then appeared to an 18 year old, ancient UCD history such as the 1948 Olympic crew. Frank McKenna’s bright wit and intelligence made him the life and soul of the sessions and he is the main reason they remained so vivid in my memory. His passing has marked the passing of a great era in the history of UCDBC. In his own words Oiche mhaith codladh samh.